A Tribute to Roberta Schaefer 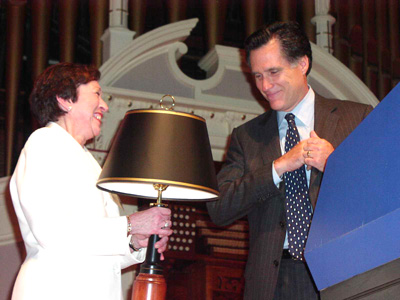 In 1985, Roberta Schaefer, Ph.D., was appointed founding Executive Director of the Worcester Municipal Research Bureau.  Under her direction, the Bureau grew from a one-person office preparing studies on municipal issues to a five-person regional center of information and expertise in all areas of public policy in Central Massachusetts.  In her 28+ years at the helm, The Research Bureau produced over two hundred reports, put on two hundred forums and programs, and honored nearly 100 public servants as part of the Thomas S. Green Public Service Awards.  During her tenure, she was often called upon to testify before local, regional, and state committees and served as the featured speaker for public service organizations and business events.  The Bureau’s annual meetings drew large audiences to hear from local, state, and national experts on topics of importance to the residents of Central Massachusetts.  In 2000, Dr. Schaefer began The Research Bureau’s citizen-informed government performance measurement program funded by the Alfred P. Sloan Foundation, which received widespread recognition for its citizen engagement and collaboration with the public sector leading to measurable improvements in government performance.  Dr. Schaefer and the Bureau also oversaw a successful New England region government performance measurement project initiated by the New England States Government Finance Officers Association.  In 2008, Dr. Schaefer was elevated to President & Chief Executive Officer of the Research Bureau.

Dr. Schaefer served as a member of the Massachusetts Board of Education from 1996 to 2007 and served as vice-chair from 1998 to 2001.  As a member of the Worcester community, she has served as a corporator of Bay State Savings Bank, the Greater Worcester Community Foundation, and the Worcester Art Museum.  In 2010 she served on the City of Worcester Mayor’s Task Force on Job Growth and Retention.  With her husband, David Schaefer, Professor of Political Science at the College of the Holy Cross, she has co-edited two books (Sir Henry Taylor’s The Statesman and The Future of Cities) and authored many articles in professional journals.

The Research Bureau honors the work and contributions of Dr. Roberta Schaefer and her critical role in making the organization a leading voice for good governance and public policy in Central Massachusetts.